In-patient falls are the most frequently reported safety incident. More than 250,000 falls and 1,000 fractures are reported from hospitals each year in England and Wales.1

Recent UK data shows an average of 6.63 falls per 1,000 occupied bed days, which equates to more than 1,700 falls in an 800-bed general hospital at current bed occupancy rates.2 Data also showed that 30 – 50% of falls resulted in  physical injury, as well as fractures which occurred in 1-3% of patients.3

As the population continues to age, the number of elderly people aged 80+ is expected to double from 3m to 6m by 2030. As people live longer, more elderly patients are being admitted to hospital, signalled by a 58.9% increase in admissions of those aged 85+ in England between 2006-16. Falls and fall-related injuries are a common and serious problem for older people aged 65 and older, who have the highest risk of falling.4 Data has also shown that 30% of people older than 65 and 50% of people older than 80 experience a fall at least once a year.4

An ageing hospital population presents many challenges in terms of patient safety:

Recent NICE guidelines say that to help prevent and manage falls, certain groups of in-patients should be regarded as being at risk of falling in hospital. These include all patients aged 65 or older, and those age 50 – 64 years old who are judged by a clinician to be at a higher risk of falling because of an underlying condition such as dementia or a stroke.8

Falls are estimated to cost the NHS more than £2.3 billion per year.  Falls occurring in hospital not only significantly affect the patient through injuries as described above, but can cause distress, loss of confidence, loss of independence and mortality. In-patient falls have a negative impact on quality of life and health for patients and cause distress for their families and caregivers.5

4. Steventon A et al. Emergency Hospital Admissions in England: Which may be avoidable and how? The Health Foundation, 2018.

5. NHS Improvement: The incidence and costs of inpatient falls in hospitals. July 2017 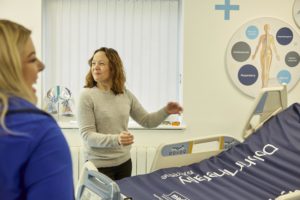 Medstrom Continues to Invest in Clinical Evidence and Research

How Do I Move a Plus-Size/Bariatric Patient?