Part 2: How Can I Prevent Complications From Immobility? Respiratory System

The main function of the respiratory system is gaseous exchange which is the transport of oxygen from the air to the blood and removal of carbon dioxide from the blood1.

The complications immobility can greatly affect the respiratory system causing changes to the lung volumes. These include tidal and residual volume and forced vital capacity and structural changes. Tidal volume is naturally in the region of 500mls when someone is in the upright position2. When a patient is in the supine position for long periods, it affects the movement of the ribcage, thus reducing tidal volume to around 32%2. Normal tidal residual is around 1.5 litres3. When the patient is confined to bed, volume decreases and the risk of parts of their lungs collapsing increases.

Forced capacity is the amount of air the patient can expel after an intake of breath. When the patient is supine, the amount can be reduced. This is usually due to resistance in the air ways and structural changes within the lungs. Structural changes within the respiratory system occurs when a patient is confined to bed in the supine position, and the fluid that normally coats lower respiratory tract (mucous) tends to pool in the lower part of the airways causing the collapse of alveoli. This has a detrimental impact on the lung’s capacity to exchange oxygen and carbon dioxide across the single cell alveoli membrane into the capillaries. This also impacts the gateway through which oxygen enters our bloodstream and the primary way in which some of the waste products of metabolism can exit the body.

For patients who are critically ill, to prevent further collapse of the lungs proning is often considered. Proning (placing a patient face down) minimises the effects of gravity on the lungs. In this position, the heart no longer weighs heavily on the lung tissue, but instead rests against the sternum. Lung tissue at the back of the thoracic cavity is relieved of the weight of gravity and is more capable of expansion, allowing easier gaseous exchange. Better oxygenation in the prone position is believed to be caused by improving the matching of ventilation (the speed of oxygen and carbon dioxide exchange in the lungs) and perfusion (the speed of blood flow through the lungs)4. If patients in the critical care setting are too unstable to prone, kinetic therapy (better known today as lateral rotational therapy) can be used. These are specialist rotating beds that can laterally rotate the patient from left to right (see Multicare and Eleganza 5). The action of the rotation movements enhances gas exchange by preventing secretions from ‘pooling’ in the lungs.5,6

Another long-term problem caused by immobility is acute respiratory distress syndrome (ARDS), especially in the critical care patient. ARDS affect the alveoli and can result in reduced oxygen being delivered to the tissues of our body. Consequently, this may result in damage caused by hypoxia to every major organ. Survivors of ARDS can have persistent functional disability one year after discharge from the intensive care unit. Most of the patients have extra pulmonary conditions, with muscle atrophy and weakness being most prominent7.

The utilisation of hospital beds and strict repositioning schedules for the individual patient and can help to prevent abnormal distribution and pooling of mucus in the respiratory tract and reduces the risk of infection or atelectasis.

Read part 3 where we discuss the haematological consequences of immobility.

Click the links below to read the rest of this series:

How do I Prevent the Complications of Immobility? 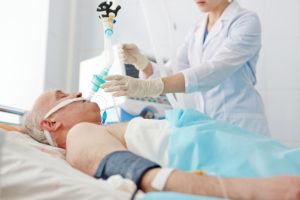 Why are Almost a Third of Ventilated Patients at Risk of Ventilator-Acquired Pneumonia (VAP)?